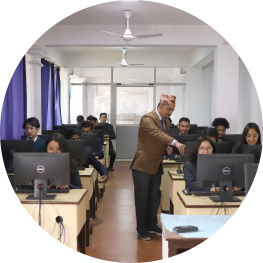 Computer engineers work on components, devices, programs, algorithms and systems that are used in computers, and on techniques of computation, analysis, and implementation that are applicable to single computers or to systems of computers.
In the past, work in this area used to be compartmentalized between hardware and software, but the boundaries between these two categories have become less distinct. Many computer engineers (and electronics engineers) are well versed in both hardware and software, and provide “hybrid” solutions on a regular basis.
Due to the wide use of computers across industries and applications, we find computer engineers in many diverse areas. For example, computer engineers design application-specific integrated circuits (ASICs) for use in cellular phones; they devise and program field-programmable gate arrays (FPGAs) for control systems in manufacturing plants and power stations; they develop microprocessors for personal computers; they introduce embedded systems into diverse applications such as digital watches, portable music players, traffic control systems, and systems that control nuclear power plants.
Many computer engineers work on the design of very large systems that integrate many components and many computers. One example is computational grids, which harvest the resources of hundreds, even thousands of computers for performing intensive computations that are beyond the capability of a single computer. Another example is data grids which allow sharing and management of large amounts of distributed data (such as health information of patients in a country by hospitals, or meteorological and other environmental information collected from thousands of sensors in the ocean). Many computer engineers are involved with communication networks that connect multiple computers, sensors, actuators, and special-purpose devices.
Computer engineering thus provides society with many critical utilities. Computers and computer engineers have an impact on public welfare and safety, as well as on health and healthcare, the environment, quality of life, transportation, the food supply, computing, and leisure.

Some of its Specialized fields for Computer Engineers